Nigerians illegally entering Europe are on their own: PDP attacks Buhari over statement 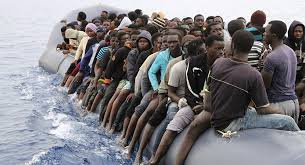 The People’s Democratic Party(PDP) has faulted president Muhammadu Buhari for a statement attributed to him, that Nigerians caught up in their attempt to illegally enter Europe, are on their own.

The president was said to have told Angela Merkel,  the Chancellor of Germany this, while they met at the State House on Friday.

In a statement signed by Kola Ologbondiyan, it’s National publicity secretary, the party said the statement shows that the President is not bothered by reports that over 10,000 Nigerians died in the Sahara desert while trying to leave Nigeria.

President @MBuhari has shown that he is not bothered that no fewer than 10,000 Nigerians died in the deserts between January to May 2017 alone, while trying to escape the economic hardship and escalated insecurity occasioned by his misrule. @OfficialAPCNg pic.twitter.com/Z0FrcCJWsu

The opposition party also accused the president of failing woefully as it said, it was wrong for Mr President to say that those Nigerians left, to find ‘greener pastures’, but hasn’t done anything to solve the problems.

Is it not an act of gross leadership failure that, in his outburst against Nigerians, President @MBuhari admitted that they left in search of “greener pastures”, yet he could not articulate any solution to mitigate the suffering his administration has unleashed on our nation pic.twitter.com/hEUB9Un7A8