Pastor impregnates traditional priestess, promises marriage after she cursed him 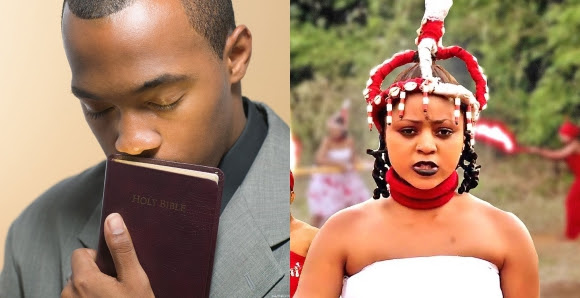 A Ghanaian pastor, Nicholas Obeng Nyame, who reportedly impregnated a traditional priestess and denied responsibility, has found himself in a big mess.

Nyame who reportedly sneaks into the traditional priestess’ house to get intimate with her, began dating her after he offered her a lift some months back. Adomonline gathered that when their intimacy resulted in a pregnancy, the pastor denied being responsible and further the priestess to abort the baby.

The Traditional Priestess who refused having an abortion, went on to place a curse on the pastor for denying responsibility for the pregnancy. However an amicable resolution was reached, after Pastor Nyame informed the leadership of his church who later accompanied him for the settlement.

The Priestess who stated that Nyame must accept the pregnancy and promise to marry her after she had delivered her baby, reversed the curse after the pastor accepted the conditions.

This is coming after another Ghanaian man of God, Prophet Nana Poku, sparked controversy on the internet after videos emerged where he engaged a woman in a long French kiss, and later claimed he had healed her of an ailment.

While other church members looked on, Prophet Poku is seen in the 28 seconds video footage kissing the woman deeply while one of the church elders kept shouting: “Yes Lord, Yes Lord.”

The incident has been causing a lot of debate with many saying that God can deliver a sick person using any unorthodox manner while some believe the Prophet is fake and using demonic powers for his healing.