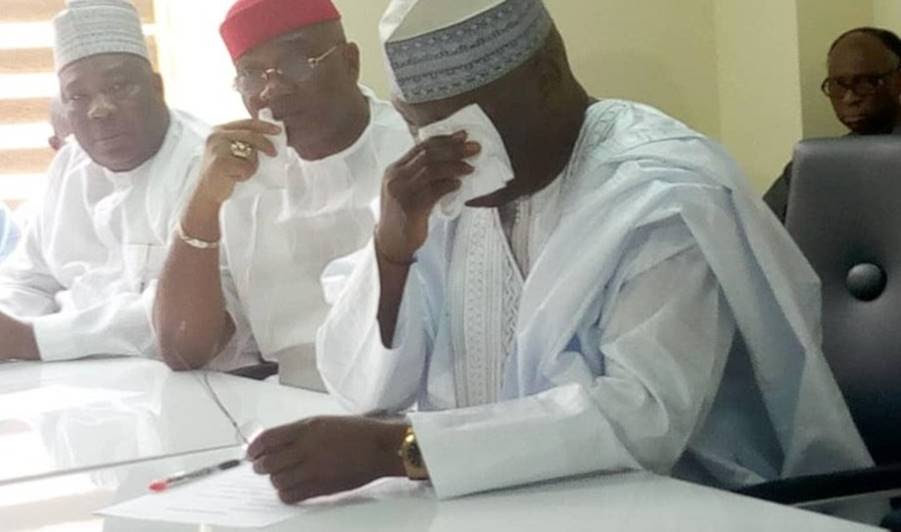 Former Vice President, Atiku Abubakar couldn’t hide his emotion earlier today after he picked up the PDP Expression of interest and Presidential nomination forms at Wadata house, Abuja.
According to Vanguard, the politician wept while receiving the forms from the Atiku Support Groups (ASG) which purchased same for him, reiterated his commitment to the Nigerian cause, and promised to do everything possible not to disappoint Nigerians if given the opportunity.
Unable to overcome his emotions while a member of the ASG, Princess Adekemi Adesanya was painting in graphic details, the sorry state of affairs in the nation, the former Vice President fought back tears as he sobbed, wiping his eyes with the aid of a white handkerchief.
He said: “The event today (purchase of nomination form) is significant and historic because this is the only time in my political career that young men and women in this country have come together without my knowledge or even consent to contribute their own hard-earned money to buy me an Expression of Interest and Nomination Forms.

“You could have seen that one of the ladies who spoke virtually succeeded in getting me to weep. This is because she aptly described the challenges every Nigerian is facing in this country today and she believed honestly and sincerely from the bottom of her heart that I could be an instrument of addressing those challenges.

“So, for such a woman to believe that I have got those leadership qualities and including those of you who have brought out your monies to by this form, is one of the most serious challenges I have ever faced in my political career.
“And believe me, addressing those challenges is possible because we have brought young men and women, Nigerians who have got the talents, who have got the education, who have got the experience, who have got all what it take to honestly turn this country around.”
Atiku also attributed the slow pace of development in the country to the failure to harness the creative energies of young people by successive administrations.

“Putting together such talented young Nigerians requires leadership and it is that leadership we have not been fortunate enough to have on a consistent basis that this country has not been able to take her rightful position in Africa and indeed, the world,” he stressed.
That said, the Wazirin Adamawa eulogized former Chief of Staff, Supreme Headquarters, General Shehu Musa Yar’ Adua (of blessed memory) on whose feet, he learnt the rudiments of partisan politics.
His words: “The man who actually brought me into politics, the late Shehu Yar’dua, when he invited me as a young man told us to break the regional siege that every parts of this country had been subjected to.

“He asked us reach out to every Nigerian across the Niger. To him and for him, that was a major objective; so when he died and I decided to build the Yar’ Adua center in his memory, we got an architect to design the uncompleted bridge.